This famous map of the entire visual sky in galactic coordinates was performed at the Department of Astronomy in Lund in the early 1950s. It has become known to astronomers all over the world through its dissemination in scientific journals and books. The work, which took two years, was performed by Martin and Tatjana Kesküla under the direction of Knut Lundmark. It was funded mainly by the Hierta-Retzius Foundation and by the Royal Physiographic Society in Lund. The map was completed in 1955. The original map has dimensions of 1 x 2 metres and belongs to the Department of Astronomy in Lund.

How the map was made

The panorama is a drawing in Aitoff projection with galactic coordinates, where 7000 stars with known coordinates were plotted in exact positions. After that, the Milky Way band has been inscribed with photos from Solon I. Baileys and Frank E. Ross' Milky Way atlases as model. In this case, already plotted stars have served as orientation points. Since the different photographic images can show large differences in limiting magnitude, this has been corrected to a uniform value by means of the Dutch astronomer Antonie Pannekoek's isophotes. It is, among other things, the limiting magnitude, which makes it difficult to copy the different Milky Way photographs to the same look and paste them to a map.

The coordinate calculations and the co-ordination of the coordinate network and the plotting of the stars have been performed by Martin Kesküla, while the insertion of the nebulous parts has been performed by Tatjana Kesküla. The structure of the Milky Way band was worked out partly by a spraying procedure using an airbrush for the thinner parts, and partly by using a dot technique with a brush for the heavier marked parts. Throughout the work of Milky Way structure, this was checked periodically by placing a transparent paper with the plotted Pannekoek isophotes over the panorama.

It can also be mentioned that stars drawn using a pair of compasses appeared as unnaturally sharp points in relation to the more natural "hand-crafted" Milky Way background. It was therefore necessary to also diffuse the stars with the same dot technique used for the Milky Way band, so that they had the same appearance as the stars on the photographs.

Short orientation on the map

Since this projection of the starry sky deforms the familiar constellations, some orientation may be required. To the left we see the constellations Auriga and Perseus and the bright parts of Cassiopeia and Cepheus. The big dark divide in the Swan and Eagle appears to the left of the middle, where Sagittarius is visible. To the right of the middle, the Milky Way continues through Centaurus, the Southern Cross, Carina and Canis Major. The fainter parts on the right are Monoceros and Gemini, and on the far right we are back in Auriga again. In the lower right half we see the Magellanic Clouds, and far to the left, just below the Milky Way band, the Andromeda galaxy is visible.

The pulsarium at Tycho Brahe Observatory

The Tycho Brahe observatory has a unique so called pulsarium. The idea originated from an article in the Sky & Telescope already in the 70's. Someone had placed on a small map of the Milky Way some lights whose flashing would represent the first discovered pulsars. Pulsars had recently been detected by radio telescopes. It turned out that they represented the first observational evidence of the existence of neutron stars. 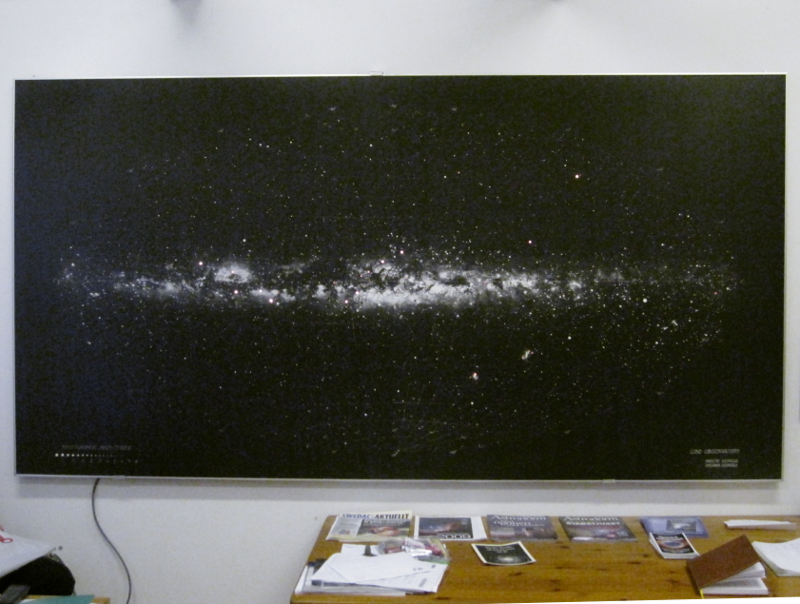 It was realised that we had a great opportunity to expand the concept. Through good contacts with Lund Observatory we obtained a photographic copy of the famous Milky Way panorama, in full scale. We drilled holes for 50 lamps. Then we drilled another 50 holes, the first lot was wrongly placed because we used the wrong galactic coordinate system! An extensive electronics construction was made by Mikael Nyquist. Each lamp was blinking at the same frequency as the pulse it represented. The result was excellent.

In the mid 90's, the observatory was subject to a disastrous fire, with the assembly house burned down and needing to be rebuilt from scratch. So also our pulsarium. This time a copy was made about 20% larger than the original(!). Lars-Olof Hansson built new and more modern electronics, this time for 100 pulsars. This (double) masterpiece, perhaps unique in the world, is viewed and admired by all visitors, and also gives incentive to tell about important parts of astronomy.