The Great Debate 1920 – that year´s version of the "William Ellery Hale lectures" – focused on the theme "The Distance Scale of the Universe," – was in fact two lectures by Heber D Curtis and Harlow Shapley with subsequent questions and answers. It is said that the combatants traveled the same train to Washington (Shapley from Mt Wilson, Curtis from the Lick Observatory), met on board but did not say anything to each other about the contents of their respective speeches; however, the main points in each other's reasoning were well known in advance.

The controversy in short: Harlow Shapley had studied variable stars, the cepheids, and used these to measure distances in the universe, especially to the globular clusters. It was these studies that formed the basis for his description of the Milky Way as a relatively flat spiral–shaped disc with the sun in the outer area. He had also determined the size of the Milky Way to 100 kiloparsec in 1917. In the past, the general perception was that it was no greater than some ten kiloparsecs. He argued that if the Andromeda system was not placed in the Milky Way, the distance to it must be 100 000 000 light years. It was a distance most astronomers could not accept. He was supported in the measurement data by Adrian van (sometimes spelled with great V)Maanen who measured movements of spirals like M 101. If it were as large as a galaxy, its outer area would move with a speed greater than light. In addition, a nova observed in the Andromeda system 1885 was much stronger than the nebula itself, and that a single nova would shine stronger than the celestial body it was in was not reasonable. 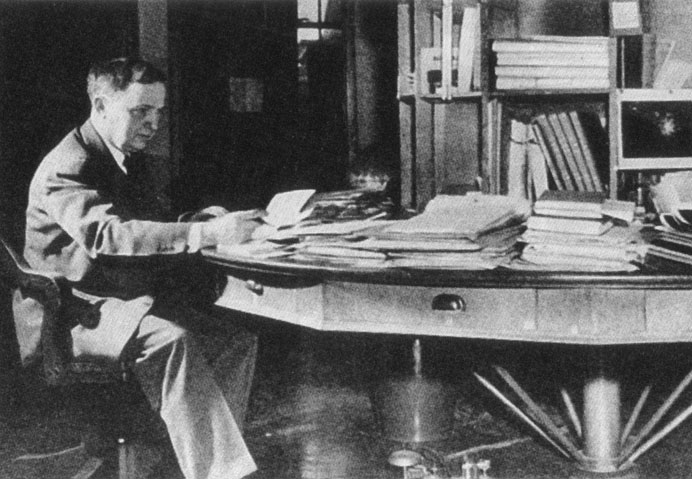 Notably, Shapley, in his autobiography "Through rugged ways to the stars" (1969), claims to have forgotten most of the discussion, which he regarded as a shared double victory or a shared double loss. No one got really right about it and among other things that haunted them were van Maanen's measurements of movements in the outer area of ​​a spiral like M33 (see the tab). Shapley supported van Maanen: "Van Maanen was his friend friend and he believed in friends", he writes about himself in the third person. Further on in the memoirs, however, the memory is razor–sharp: "Later I too recognized that Van Maanen´s measurements were wrong. Knut Lundmark came over from Sweden to go through the measuring of rotations of the galaxies and he could not verify Van Maanen´s figures. But he was a gentleman; he did not want to critizise them publicly. When I found it was a false trail I switched immediately to the truth; I have been complimented more than once on that since. Curtis also yielded pretty soon on the scale of the universe."

1927 Lundmark reviewed the whole complex in his Uppsala paper "Studies of anagalactic nebulae – First paper": "At the debate between Curtis and Shapley before the Academy of Sciences, April 26, 1920, the latter qould quote several results which were very serious for the theory that spiral nebulae are of the same size as out galaxy. Thus Seares had deduced the surface brightness of the galaxy and found that none of the known spiral nebulae had such a small surface brightness. Reynolds had concluded from his studies of the distribution of light and colour in typical spirals that they can not be stellar systems. Van Maanen had obtained values for three spiral nebulae corroborating his earlier work on Messier 101 and indicating that these bright spirals can not very well be situated at such obsessive distances as required by the results of Curtis and myself."

Further on in the report, then having discussed the spectroscopic measurements from Lick, his recalculations by Van Maanen ("... the situation seemed to be rather hopeless of the followers of the island–universe theory"), Lundmark still find himself landing on safe ground – with novae as distance indicators and Hubble´s Cepheid discovery in M31: "I think that most astronomers believe that the question is settled now. The explanation of what Van Maanen's results contain, if not real motions, has not been given as yet and will be very difficult. to find. " Even in other, both popular and scientific articles, Lundmark commented in The Great Debate and held it unbelievable that there would come discoveries that would overturne the overall theory of spirals as anagalactic systems. Anagalactic was Lundmark´s invention! Lundmark himself writes in perhaps the best contribution available in Swedish, a book published in 1929 in the form of his extended and improved version of Svante Arrhenius "The Worlds Development", part 2: "In the discussion held in 1920 between Curtis and Shapley, of which the former represented the island–world theory and the latter considered that the nebulae belonged to our star system, of course van Maanen's measurements played a very big role, and Shapley stressed that there was no reason to give up.

At the same time Lundmark identified the bright nova i M31 1885 (S And) as an, in his terminology, "overclass nova" of the same type as Tycho´s nova in 1572, that is a supernova as we say today, a stellar explosion of a more violent and different sort than the usual classical novae.

So this was the situation until Knut Lundmark's recalculations of Van Maanen's results – the same plates, the same instrumentation – were published. Those, as it turned out, fictional movements in the spirals were explained, kindly, as a result of what we might today call the Van Maanen's personal equation. Shapley yielded. The Great Debate has been the subject of several heavy analyses and discussions. Curtis and Shapley's lectures are now published as a flipchart, which is available here for the interested readers.